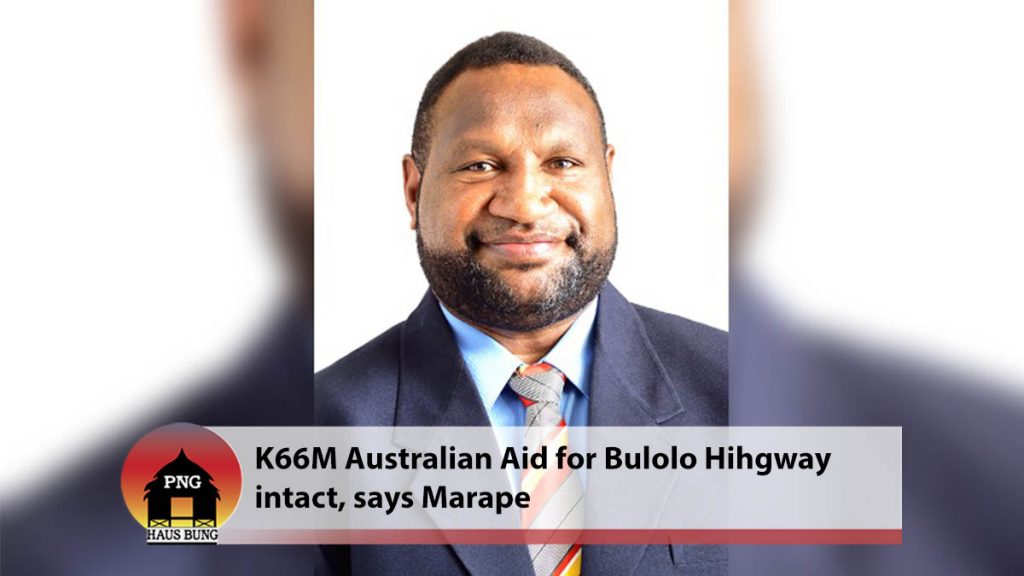 Prime Minister Hon. James Marape says the Government has no “sinister motives” in holding back K66 million allocated by the Australian Government for maintenance of the rundown Bulolo Highway in Morobe.

He said this in Parliament today when asked by Morobe Governor and Deputy Pangu Pati leader, Hon. Ginson Saonu, as to why work was being delayed.

The Prime Minister assured Governor Saonu and the people of Morobe that the K66 million given by the Australian Government was intact.

PM Marape said he had already explained, in reply to critics, that the Bulolo Highway was so badly damaged and would cost more than the K66 million, hence, his Government would add another K50 million to bring the total up to K116 million.

The K50 million is from the K100 million allocated for Wafi-Golpu Infrastructure Development Grants (IDG), K10 million of which had already been given to Morobe Provincial Government and K3 million each to affected districts.

PM Marape said he had already travelled the Bulolo Highway three times, the last being in September when he attended a Wafi-Golpu landowners’ meeting, and had seen for himself the extent of damage.

“It will take more than K66 million to fix the damage,” he said.

“The contract has already been awarded, however, I have written to the Australian High Commissioner and have also talked with the Works Minister about variations to the contract.

“This is so that instead of just doing maintenance work, which will be washed away by the rain, we can do a permanent intervention for the better. The Prime Minister said K66 million may sound like a lot of money, however, it would only be used for maintenance work.

He said it was his Government that pointed the Australian Government in the direction of Wau-Bulolo for project funding, which critics must know.

“We pointed out areas for them (Australian Government) to invest in, one of which was Wau-Bulolo,” he said.

“When I drove from Mumeng to Lae, I realised the massive extent of damage along this section of the road.

“It’s a very-important economic road so Works Department, Works Ministry and Australian Government have been in discussions over the last few months to see if there can be a variation to the contract.

“It will also assist us (Government) in investing substantially on this road, especially the section from Mumeng to the Markham River.”

OMICRON SPREADING IN THE COMMUNITY IN THE UK

‘TEN NEW FEMALE ‘OFFICERS OF THE WATCH’ FOR PNG’

OMICRON SPREADING IN THE COMMUNITY IN THE UK

‘TEN NEW FEMALE ‘OFFICERS OF THE WATCH’ FOR PNG’