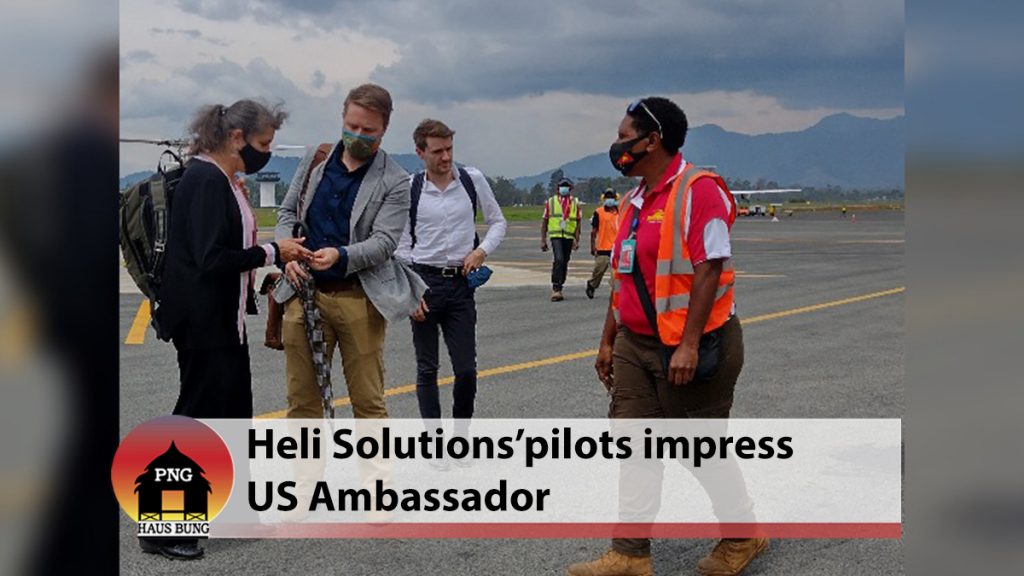 U.S Ambassador to Papua New Guinea, Her Excellency Erin Mckee, on her recent trip to Kwiop in Jiwaka Province last week was ferried through Western Highlands Province by Heli Solutions.

Being her first trip to the region, her excellency, was given an aerial tour of American funded projects in Jiwaka Province upon her return to Western Highlands Province.

Her excellency was impressed with Heli Solution’s services and on her return to Mount Hagen, presented two American and Papua New Guinea crossed flag lapel pins to Heli Solutions pilots in recognition of their service.

The pins symbolise the existing partnership between American and Papua New Guinean governments.

Heli Solutions Grounds Manager, Linda Wii, who was on the tarmac at Kagamuga Airport to receive the US Ambassador thanked her for trusting a fully flagged national company to transport her excellency and her team.

Heli Solutions Pilots, Captain David Takindu and Captain James Pima were presented the pins on behalf of the US ambassador by Grounds Manager, Linda Wii, and witnessed by staff of Heli Solutions at their Mount Hagen Hanger. 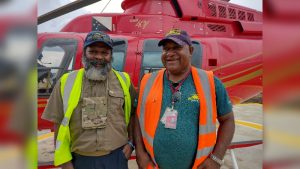 Captain Takindu and Pima who are both former service men in the PNG Defence Force were familiar with the military protocols involving state representatives and transported the ambassador with ease.

Captain Pima as Chief Pilot of Heli Solutions was surprised and pleased at the gesture shown by her excellency.

Both Pilots extends their gratitude to her excellency and her team at the US Embassy and are humbled to be presented such an honour.