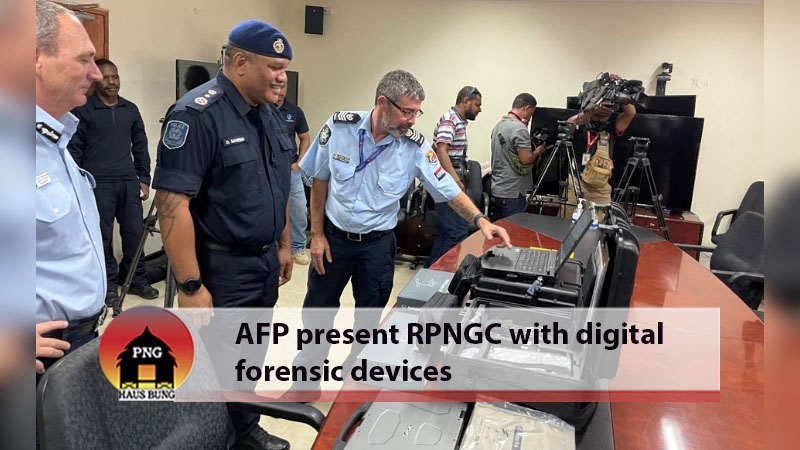 The Australian Federal Police (AFP) presented two new portable digital forensic devices to the Royal Papua New Guinea Constabulary that would enable the RPNGC to develop and implement a digital forensic capability to investigate offences with a digital media aspect.

The equipment was presented today  at the Police Headquarters in Konedobu in the nation’s capital to the Commissioner of Police, Mr David Manning. The presentation was witnessed by Deputy Commissioner of Police Special Operations Donald Yamasombi, senior officers of the PNG Australia Policing Partnership, senior officers of the Constabulary and the media.

Assistance Police Commissioner and Commander of the PNGAPP, Mr Jamie Strauss said the equipment was purchased together with a three-year Cellebrite licence to operate the machines and gifted to the RPNGC.

Commander Strauss said the devices are mobile device data extraction and reporting tools that can be used on mobile phones, portable hard drives and sim cards. Mr Strauss said the equipment will allow the RPNGC capability for its own forensic process which incorporates the seizure, forensic imaging and analysis of digital media along with the production of a report on collected evidence.

Commander Strauss said, “The Cellebrite Responder mobile device data extraction and reporting tool, combined with appropriate training is a significant capability. Police have seen increasing quantities of mobile phones and storage devices being seized, particularly in response to Transnational Organized Crime. The RPNGC is now capable to contract content from digital media devices and present that content to court in an admissible evidentiary manner.

“When in use in accordance with the training methodology, evidence from the digital devices can be collected with confidence in the knowledge that the validated processes have not compromised its integrity, should it be required for court.”

Mr Manning said, “Policing has been an evolving challenge in terms of forensic in RPNGC and this capability is very much needed. As we are now in the technological era, most crimes are perpetrated through the used electronic devices and with the Cellebrite system it provides an opportunity for us to assure our people that the RPNGC is on track.”

Ten members of the Constabulary have been trained in the use of this new technology. Two of them, Constable Michael Oaeke from the RPNGC’s Transnational Crime Unit and Constable Stanis Luveni from the Water Police Directorate were on hand to demonstrate the functions of the new equipment.